So, the other night, I had a dream. It wasn't amazing or inspiring. In it, I was in a city, exploring with some friends (I interrupt this dream to tell you that I was young - teenager or a little older, I lived with two parents I believed to be my parents even though I've never met them and I had a younger brother who wasn't my real brother, but a kid only a couple years younger than me.) and I found an old friend of mine.

This person was really an old friend of mine. Someone I knew in high school and probably haven't seen in 20 years. We'll call him "Mike." Mike was an artist in real life and a talented one and in my dream, he was too. He was good and he was talented and he was sweet and kind and he needed my help.

And the dream went on and on in that way dreams do. I won't go into all the details because that's just tiring, but I promise it doesn't matter because like in most dreams it involved a lot of "and then suddenly I was..." and "and I'm not sure how, but next..."

But it doesn't matter. The important part wasn't the dream itself it was Mike. It was the lingering feeling that stuck with me about Mike. All day long, honestly all week long. I wondered about Mike. I searched for him on social media and swore that I used to be Facebook friends with him and, what happened?

I thought about sending messages out to those I knew were mutual friends, but didn't because, "I had a dream about him and wanted to make sure he was alright," sounds like a stalker or a psycho or both.

And here's the thing, I don't think I'm psychic (or psycho) but this isn't the first time this has happened to me. This isn't the first time I've had a dream about someone and then wanted to just check, just make sure everything was fine and couldn't. I don't know why. But I do and I have the hardest time shaking that feeling and now I have it again.

Make me feel better. Tell me I'm not the only one.
No comments: 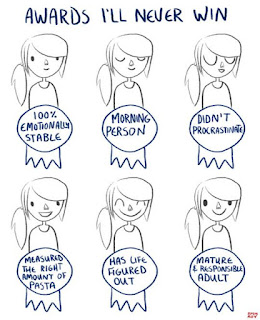 I saw this really cute post on Facebook today by the adorable Emm Roy of awards I'll never win. Unfortunately "Drawing an Adorable Web Comic," is among the awards I'll never win, so I thought I would just make a list. You know, lists, the absolute laziest of web content...


So, what about you, what awards will you never win? Also, follow Emm on Tumblr, she's precious. And follow me on Tumblr. I hardly ever remember I have one.
No comments:

Voting with My Kids

If you know me IRL, you probably understand why I sometimes feel that I deserve an award for how completely and totally devoid of politics this little corner of the web is. I mean, you can probably discern some of my thoughts and feelings based on other things, but I don't talk about politics. And honestly, I'm not going to today.

I'm just going to talk about voting. With my kids in tow. I started taking Brynna to vote with me when she was in a carrier and I haven't stopped. I gave her the option of sleeping late this morning, but she turned me down and got up early, showered, dressed and out the door in record time to participate in our usual process.

Maren loves voting. She talks about it as soon as she first sees political ads. I gotta tell you, waiting for this election day was worse than waiting for Christmas for her.

Every year, in addition to signing in, standing with me in the booth and collecting our flag waving, "I Voted," stickers, we spend some time talking about the process. Today's topics included the difference between a democracy and a democratic republic, the workings and failings of the electoral college and the ever-present lecture on why we vote.

Sometimes, we discuss candidates on election day, but usually, we've covered all that well in advance. They know my process - how I research, how I weigh options when they seem equally good (or bad) and how I reach a decision. They know that I believe that it is important to check your sources, to be open to learning new information, but closed to gossip and advertising. They know about listening for truth in advertising by determining what the demonstrable claims are and doing your own independent research.

Honestly, this is a golden age for voting. (I know, I know, I can hear you laughing through the early exit poll results.) But think about what researching beyond the commercials used to mean and compare it to what it means now. We used to rely on newspapers and political pundits to show us the truth, but now, we have a plethora of sources on the internet. You can go directly to the source, frequent the site that reflects your own opinions or take a survey of hopefully neutral sites. There are massive amounts of information, soundbites and everything in between. You can research at your own pace and level of ability.

And are people? I don' t know. I want to say yes, because I want to believe in people, but in an election like this - and by that I mean one that is all about one (fairly useless) race while the races for those who actually make the changes are ignored - it's hard to believe.

I know, I know. I've been totally MIA, and then I show up here like nothing happened and ask for a favor. 'Cause that's what I'm doing. I'm totally showing up out of nowhere to ask for your help. Because (if you're still around and seeing this) you are my people. You're the people who have stuck with me through my divorce and my coming to terms with my mental health issues and my weird conversations with my kids. And you're the people I can count on.

So, before I get to the favor, some updates:


So, here's what I would like you to do. In another list, because I'm a fan of lists:
So, that's it. Just four simple steps to helping me make my dreams (literally since I was 8 years old and figured out that people wrote those things I was obsessed with) come true.

Email ThisBlogThis!Share to TwitterShare to FacebookShare to Pinterest
Labels: writing

Look Who's Not Dead

This is the part where I usually make some excuses and I don't know what to tell you. I've been busy, I've been depressed, I've been whatever.

The truth is, that even though all those things are true, one of my issues is that I've not had a lot to say. I've kinda fallen out of love with my blog. It's not you guys, you guys are awesome. It's more that it's time for a content change and I just don't know what to write about. The kids are old enough that our conversations are rarely hilarious.

I've watched bloggers I love step down and quit writing when their kids got to a certain age and they felt that their stories were not up for sharing anymore and wondered if that would ever happen to me. I mean, on the one hand, I haven't discovered the magic mix of chocolate milk and cookies that forces children to just stay children. But on the other hand, I've never really thought of this as a mommy blog.

I mean, I know I write a lot about my kids, but I also write about depression and divorce and being a geek and every other little thing that pops up in my life. None of those things belong to my kids or are contingent on their stories.

But here I am, and over the past couple of months, the only times I've touched this blog is to update my 36 Things. I've lost my passion for this place and I don't know what to do next. I'm not sure if I should try to recapture it or if I should just let it go, let it slide away.

Look, I want to make something clear - you should feel free to say whatever you want to say, but this is NOT me hinting that I want you guys to beg me to keep writing. In the first place, I'll never quit writing, I just may quit writing here. In the second place, according to my stat counter, "you guys" are like 6 people, so if you want to know what's going on in my stupid world that badly, I could just email you.

I never did this for anyone else, though, I've always done it for me and now I'm just not into it exactly. But I do miss it. Which I know is a weird little conundrum. I don't miss writing here so much as I miss the feeling I used to have about writing here. I used to walk around thinking, "I can't wait to blog this." I haven't thought that in months.

But, on the other hand, I like having this as my home base. This place is my place, more than Facebook, Instagram or Tumblr could ever be.

So, this is just me whining mostly, and some existential angst. But it's also a heads up. For a while, it'll be sporadic around here, but part of that is going to be me trying to find something that I'm excited about writing again.

Search at Your Own Risk

Bloggiest Blogs in all of Blogdom

The RockStars of the Blogosphere (as determined by me)